This post was brought to you by the Girl Scouts of Western Ohio. I received product in exchange for writing this post, but all opinions are my own.

The Girl Scouts of Western Ohio sent me some of my favorite cookie flavors including Thin Mints, Samoas, Do-si-dos and the NEW S’mores cookie. I knew instantly one of the ways I wanted to enjoy the cookies was by pairing them with local craft beers. Cincinnati has an abundance of great craft breweries so it was a fun challenge to choose just four beers for the pairing. I hope you enjoy my choices!

2017 is the 100th anniversary of Girl Scouts selling cookies. Can you believe it?! As the Cookie Selling Program has evolved in the past century, it became a vehicle for teaching five essential skills – goal setting, decision making, money management, people skills and business ethics. As a former Girl Scout myself I proudly attest to the benefits for girls who join a troop. They are learning important life skills and building camaraderie with fellow girls from diverse backgrounds.

One hundred percent of the money raised through the Girl Scout Cookie Program (every penny after paying the baker) stays right here in Ohio to support Girl Scouting in our community. How amazing is that? Your Girl Scout Cookie purchase does a world of good, so stock up on your favs at girlscoutcookies.org and then get ready to try out some craft beer pairings below. I did match my cookies with beers made here in Cincinnati, but you can easily apply my suggestions to the beers available to you. Leave a comment below if you have any questions about my choices! 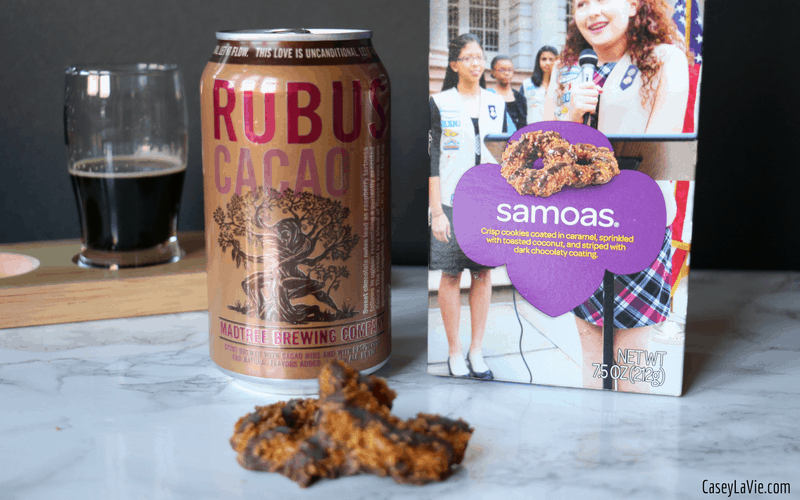 MadTree Rubus Cacao with Samoas
MadTree’s Rubus Cacao is a stout with a lot of dark chocolately tastes and aroma as well as fruity, raspberry notes. I think this one complemented the very sweet caramel and chocolate flavors of the Samoa. I would have also liked to try pairing the Samoa cookie with a stout that has some coconut flavors in it to pull out those flavors from the Samoa cookie. This combination was probably the sweetest tasting out of them all.

Braxton Brewing Co. Storm Golden Cream Ale with Do-si-dos
I paired the Do-si-dos with a golden cream ale because the two flavors blended well together and neither overpowers the other. Storm is a session ale so it’s low in alcohol and also bitterness. It pairs well with the oatmeal cookie and peanut butter center of the Do-si-dos.
I would also like to try out a Hefeweizen here. Not sure if any local breweries make hefeweizens though, but my thought is that a hefeweizen with some notes of banana would pair well with this peanut-buttery cookie. 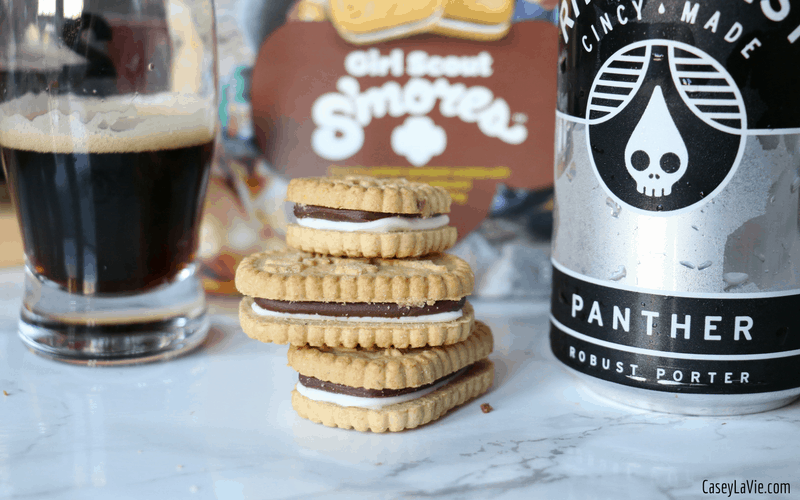 Rhinegeist Panther with S’mores
The Panther from Rhinegeist is a robust porter with roasted malts and a chocolatey taste. It was my favorite pairing with the new S’mores cookie. The cookie consists of a graham cracker cookie with a chocolate and marshmallow filling. Yum! When I think of s’mores I think of campfires. So what better to pair with a campfire-inspired treat than a beer that has a light smoke and roasty flavor? 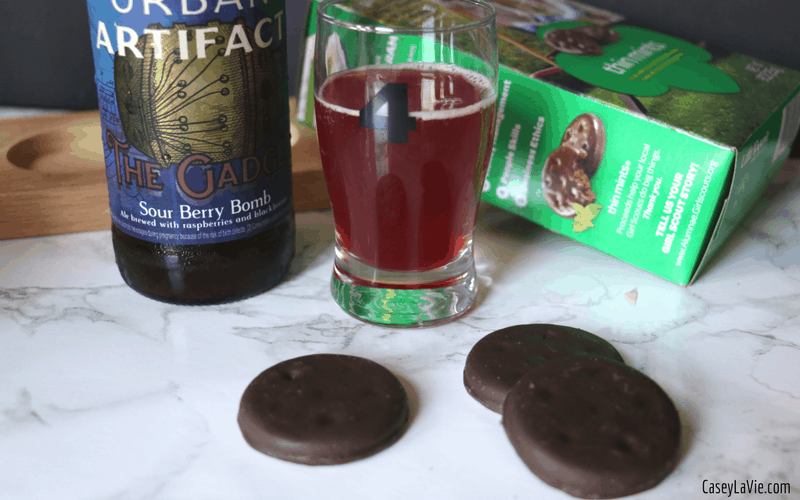 Urban Artifact Gadget with Thin Mints
This was my favorite pairing out of them all and so unexpected. I’ve seen plenty of recommendations to mix Thin Mints with porters and stouts which absolutely does make sense here; however, I wanted to mix things up. I tried mixing the Thin Mints with an IPA because I love IPAs, and while both tastes were still good, they weren’t complementing each other in a unique way. So I decided to try out one of the sour beers I had one hand – the Urban Artifact Gadget Sour Berry Bomb, a sour blackberry-raspberry ale. It was like fireworks for my taste buds. The sweet and cooling mint flavor complements the fruitiness of the beer. And I think the Thin Mint would be the only cookie to match the bite that you get with a sour beer. I highly recommend this pairing! 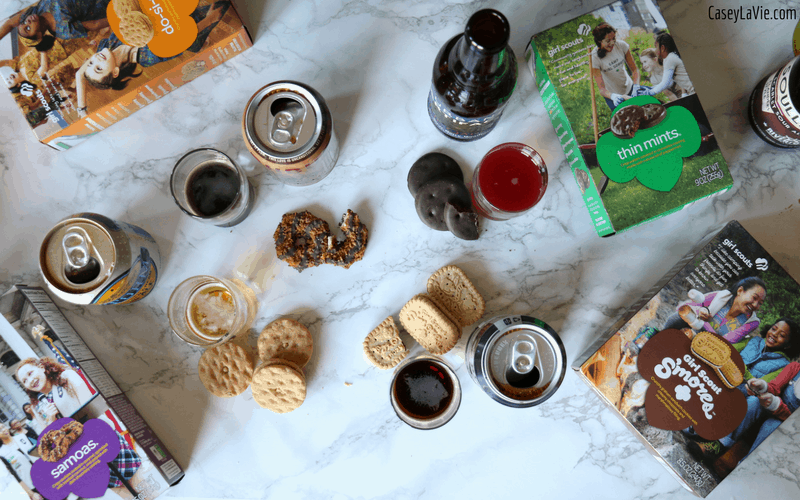 To be honest, it was tough to imagine pairing most of the cookies with another other than porters and stouts. Those beers lend themselves well to highlighting notes of chocolate and peanut butter which make up most of the Girl Scout Cookies. So I was pleasantly surprised to taste how well the cookies paired with the cream ale and sour beer.

And now for the best part: a giveaway! You can win a CASE of Girl Scout Cookies!
One winner will receive one (1) box each of the following Girl Scout Cookies flavors: Thin Mints, Samoas, S’mores, Do-si-dos, Trefoils, Savannah Smiles and Tagalongs.

This post was brought to you by the Girl Scouts of Western Ohio. I received product in exchange for writing this post, but all opinions are my own. I’m proud to share my love for Girl Scout Cookies with you. 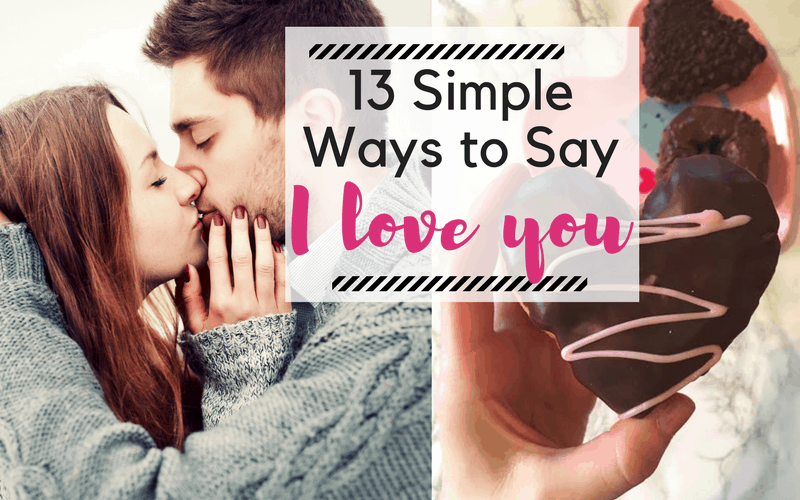 13 Simple Ways to Say I Love You 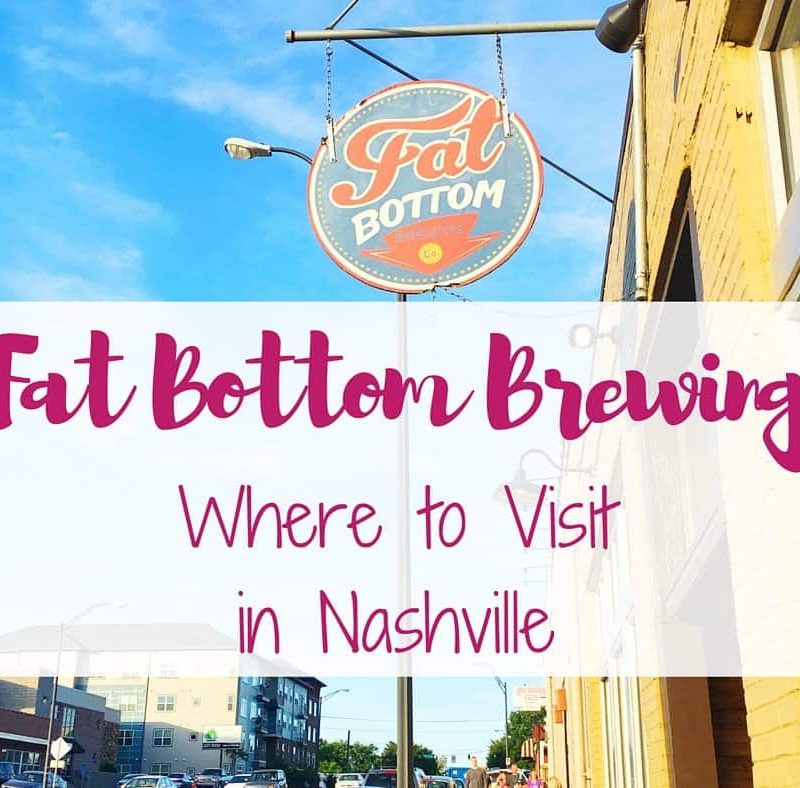